The on-stage LED grid (lovingly dubbed “Homebrew” around Willow Production) was an idea turned into reality for a specific event, which then evolved into a ministry staple. Below, Jordan Monson, our LED guru, explains more of the nitty-gritty details. 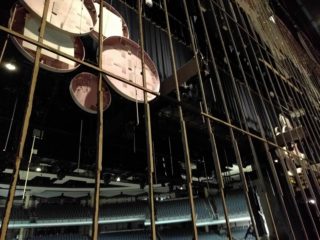 Attachment Notes (what are the LED diodes attached to): the LEDs are attached to a wooden frame that was simply plywood sheets ripped down to be an inch or two wide. Super low cost. And then the LEDs are stapled to the wood…carefully.

What Equipment Was Used: The LEDs are a product from holidaycoro.com called Brilliant Bulb in the 12” spacing, we popped off all the plastic C9 bulbs and went with just the LEDs showing. The driver is another product from Holiday Coro called Alpha Pix 16 powered by 2 – 29Amp 12v power supplies inside a box also sold by HolidayCoro.

We drive the system from our D3 Media server which outputs Artnet to the Alphapix 16 drivers.

Then we use our GrandMA 1 Lighting console as a control surface for the D3 controlling clip playback as well as color, play rate, and transition speed. Though most media playback systems capable of sACN or Artnet output could fill this role (MadMapper, Arkaos, enttec ELM, Madrix) though I have not personally used any of them.

Where was it purchased: Everything was custom built, most of the products were purchased from www.holidaycoro.com, with connectors coming from mouser.com, though you could choose to use the pre-terminated led options from HolidayCoro and save some initial work.

What was the total Cost: See price breakdown below, prices are correct as of writing this document but subject to change at any time.

Pros/cons We have found Using it:

Pro: It was cheap and has far outlived its original purpose. It was installed for our Christmas set with little expectation that it would continue long after that and a year later it has been a part of almost every weekend service since.

Pro: There has been very little maintenance required with I think only 2 pixels replacements happening and I think 1 of those ended up actually being a wire length issue

Con: It is less pixel-dense than we sometimes wish, sometimes this is a pro, sometimes it is a con, but it is something we have discussed as a 2.0 version option to go to 6” density.

If I were to do it again I would:

Mark our 12” increments on all the wood slats and line pixels up to them. The wire between each led is not always 12” or even the same so there is some deviation from line to line. As I said in Pros and cons we would possibly go with a 6”, or even 3” pitch and use something like HolidayCoro’s PixNode Net instead of the wood and kill 2 birds with one net, Pixel spacing would be spot on and also denser.